We’ve been working hard on a new capability for Safyr®. This is in the form of a metadata extraction feature to enable customers to quickly and intuitively access and exploit the Microsoft Dynamics AX 2012 data model.

As a result we are adding a new package to our list of existing interfaces for SAP, JD Edwards, PeopleSoft, Siebel, Oracle EBS and Salesforce.

We are often asked by customers if Safyr can support metadata from other packages and had noticed an increasing number of enquiries about the ability of Safyr to extract the underlying data model from Dynamics AX. As usual these requests were in support of a range of projects including Data Warehouse and Business Intelligence, Data Governance and Integration etc.

Microsoft Dynamics AX is a fast growing ERP solution aimed at enterprises who are working locally or globally.

According to Microsoft the product has around 20,000 customers and as you can see from the recent Gartner ERP Magic Quadrant research diagram below, it is well positioned against its main competitors – SAP, Oracle and IFS.

As with all requests to facilitate metadata discovery for other ERP or CRM package software solutions our initial idea was to use our ‘ETL for Metadata’ capability.

We had already employed this technique successfully with Microsoft Dynamics CRM. However after some early research work, we found that using the AX Metadata API was a more practical and preferred approach. Therefore that’s what we’ve done and it has enabled us to produce an interface to extract the Microsoft Dynamics AX 2012 data model quickly and easily and then store it in a Safyr repository.

As a result of the development work we have undertaken, Safyr for Microsoft Dynamics AX 2012 will be a fully supported product in exactly the same way as we maintain Safyr for SAP, Salesforce etc. 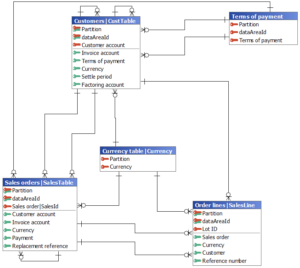 We have also found that the Microsoft Dynamics AX 2012 data model is relatively large, compared with other applications, as it has approximately 7,000 tables in the standard implementation. Therefore Safyr offers much the same value to those trying to find their way around it as the product does does for SAP, Oracle and Salesforce package data models.

The software is in the final stages of testing and is scheduled for release in the first week of September.

As a little ‘taster’, here is a small model built from a standard Dynamics AX system.

I could have just as easily made the model in any of our existing export formats (ERwin, PowerDesigner, XML….)

We will also be extending our Data Models service to include Dynamics AX 2012 models in the fullness of time.

Stay tuned for more news about this new capability and if you would like us to get in touch with you when it is released please contact us.