Today’s blog is about the Comparison features in Safyr®. This is an area of the product that may be not as widely used or understood as we’d like, however it’s very powerful, so this is an attempt to redress that.

The feature is actually called ‘Compare Subject Areas’ – the idea being to export metadata from two instances of the same ERP in order to identify where they are different.

It is also practical to do this for two entire systems – even two SAP systems of 90,000 plus tables each! To use the feature, you need to make a Subject Area in each system that you want to compare and populate that Subject Area with the required tables. As I mentioned earlier, you could do this for 2 entire systems, but just be aware that the ‘result set’ could be pretty big, if it was, for example two SAP systems.

Having made the Subject Areas, you then export each using the Export Wizard into ‘Comparison File’ format (this will be one of the export types available in Safyr). Then having made the two comparison files, you use the ‘Compare Subject Areas’ feature to compare the two. There are a set of options to control the level of granularity of the compare, and after selecting these, the result is displayed like the diagram below. 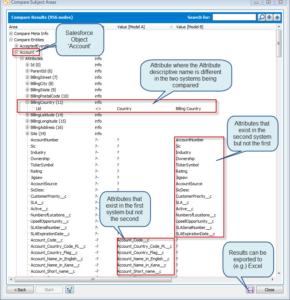 This example is a comparison of two Salesforce systems. What we’ve found over the last few months is that Safyr is becoming very popular as a means to explore Salesforce metadata. Whilst Salesforce is a lot smaller in terms of numbers of tables (Salesforce usually calls then ‘Objects rather than ‘Tables’), many customers are adding lots of their own tables, often leading to the same kind of change control challenges faced by more traditional ‘on premise’ environments. As a result we often get asked ‘how can I determine the differences between two Salesforce instances?’ (for example this could be for different locations, or might be for comparing Development with QA instances).

The feature is equally applicable to any of the environments we support (SAP, PeopleSoft, etc). I hope the screenshot is reasonably self-explanatory and that the ’bubbles’ pick out the salient points. Let me know if you need any additional clarification and I’ll be pleased to provide it.

What are you pouring into your Data Lake?

Use Safyr to find the PeopleSoft Customer-Contact Data Model – quickly...
Scroll to top