You are here: Home1 / Blog2 / Salesforce3 / The differences between Salesforce Data Models, Schema Builder and Saf...

We often asked by customers about the differences between the static Salesforce data models provided by Salesforce, their Schema Builder and our product Safyr®.

The static models assemble what Salesforce calls ‘Objects’ into meaningful groups. One of these is Sales Objects and you can see it here.

Using Safyr, we’ve created our own version of this model. You can see that in the Salesforce Sales Object in Safyr model (see image below) 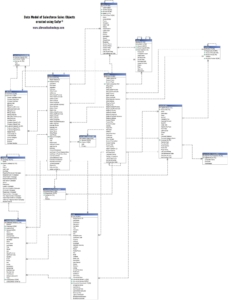 “OK, Nick,” I hear you say, “that’s all well and good but how come they are not the same?”

There are a number of reasons.

We built this model using our Safyr product. Safyr pulls the Salesforce Objects out of a Salesforce instance using a metadata API and stores them in its own Repository.

‘Order’ and ‘Quote’ for example are not persistent. You cannot query an Order for example, because there is no such persistent Object in the Salesforce data model.

In addition if you use Schema Builder, which is Salesforce’s own data modelling component, you will not see Order or Quote as available Objects. So the reason we don’t show them in our Safyr model is because they don’t exist as ‘real’ Objects.

In a similar vein, some of the ‘Objects’ in the Salesforce-provided model are not on the Safyr–derived model. For example CaseStatus is not really a separate Object, it is a Picklist of possible Status values (e.g.  Closed, Escalated, New….).

What else is different? Well, the Safyr-created model shows all the attributes. However, that doesn’t have to be the case, because Safyr offers you the flexibility to control what level of detail appears on the diagram.

Also there are other differences that are not apparent just by looking at the two diagrams.

The Salesforce model was, we assume, manually constructed, probably using Visio. On the other hand the Safyr model was created simply by choosing the Objects to be included (Opportunity, Account…) and Safyr did the rest. All we added was some quick cosmetic work to reposition the boxes and lines in the diagram.

Finally as many customers will have experienced as their reliance on Salesforce grows, their Orgs have been extended and customized to meet their own specific business needs.

This reduces the value of both the static Salesforce data models and also Schema Builder. The static data models will increasingly not reflect what is important to the customer in terms of their business imperatives and cannot practicably be kept up to date by the end user.

Schema Builder does not provide the facilities to easily search, create and save subsets of the Salesforce Data Model. It cannot export to data modeling or other information management platforms. Also it cannot be used to compare the data model between different Orgs.

This is exactly where Safyr delivers significant value because it includes customisations and any additional objects when it extracts metadata from any Salesforce Org. It also provides a broad range of navigation, search and analysis features which give the user the freedom to create and export subset data models as needed as well as the ability to compare whole or partial data models between two Salesforce Orgs.

You can try this for yourself by downloading a free trial of Safyr for Salesforce.

Inside the Black Box – it’s dark in here! Shining a light on to ERP and...
Scroll to top